Fabián Marcovich was born in Argentina in 1959. The first child of an interior designer, he grew up surrounded by art. Forced at an early age to be independent, his creativity is what saved him. His art represents this pathway into his own humanhood.

What defines Marcovich is his eclectic creativity, his ability to create from nothing and his passion for life.

At the age of 55, Marcovich encountered a semi-rotten piece of wood in the street in Buenos Aires. He had the inspiration to clean it and remove all of the rotten material in order to discover what remained. The results were inspiring. A world opened.

In 2017 the experience of living abroad in Devon, England alongside the combination of unexpected factors bordering on the magic, took Marcovich deeper into the revelation of nature and he decided to take the profession of sculpting as his own with the intention of living his art.

He decided to continue to travel around the world living in nature and searching for rare wood and stones.

On this transformative journey Marcovich has become an international artist creating pieces out of material that hold the local spirit of each area and country in which the pieces, the people and magic find themselves.

Marcovich has been recognised by the Argentinian Ministry of Foreign Affairs and Worship as a ‘an artist who contributes to the promotion of the Argentine culture and values’. 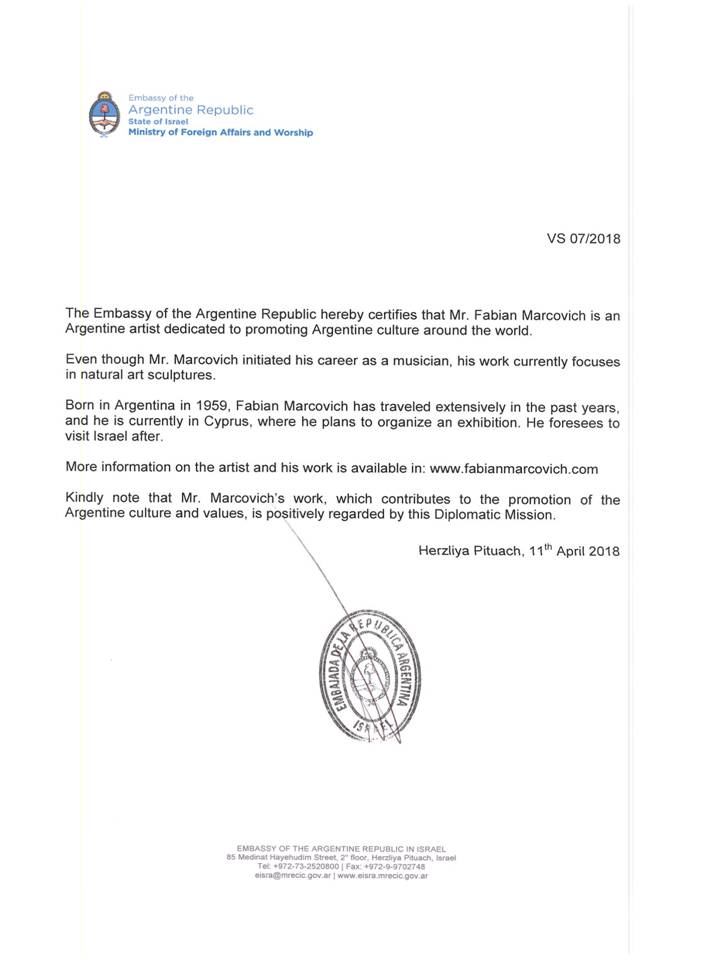 Marcovich has spent most of his life developing his sensitivity to be able to read situations, nature and life, but he has not always been a sculptor.

What he has always been is enthusiastic: it spreads like fire. For example, in the depth’s of Argentinean crises he was able to create a root-folkloric music group which with him as manager and musician played to an estimated crowd of 700,000 people during the visit of Pope John Paul II to Buenos Aires.

In Argentina he developed a cutting edge musical equipment company. Relating to musicians as a musician himself, he supplied many of the well-known musicians and top recording studios in Argentina. Its success was based on the personal, in which business was an excuse for creating human relationships. Thirty years later, the company long gone, many of his clients remain as good friends.

In this same period many of Marcovich’s personal values were developed in Aguas Claras, a project that he co-created – an intentional community based around a Centre of Investigation and Experimentation into Human Relationships. It was here Marcovich developed a keen interest in the honest search for the causes of human conflicts and the steps needed to achieve viable solutions. Aguas Claras also planted the seeds of his interest in bio-construction and appropriate technologies for self sufficient housing.

After the financial crisis of 2002, faced with bankruptcy alongside thousands of others, Marcovich had an idea in a concert to develop a music stand for multiple use which transformed into a personal journey that took him around the globe. The result was Senstand, a design that is inventive while also beautiful. It is presently patented in various countries.